I finished building my new computer. All the parts came in yesterday to complete it. It was really quite easy to build. The only problem I had was with the wifi module. First I had to file the holes out to mount the antennas, then I found it impossible to connect the wires from the antennas to the module. You have to be a brain surgeon with an electron microscope to connect the wires. Honestly, I don’t think it was possible. Big fail from ASRock on that one.

As I said, mounting the CPU, RAM, and SSD were simple and straightforward. And I was pleasantly surprised how quick and easy it was to install Windows 10. I am using a wireless keyboard with trackpad for input, and a USB wifi device. I was up and running in no time. The computer boots in about 10 seconds, much faster than the old computer it replaces. I am writing this post on the new computer. I am still amazed how small it is considering it has a 65W processor, 16GB of RAM, and a 256GB SSD. And there is still room to add another SSD or an M.2 drive.

All it all I am extremely pleased. I hope this satisfies my urge to buy or build any more computers or electronics for while. I have included a few photos I took to document the build. Now I need to go and check on the John Wayne casserole I am cooking in the crockpot for supper. 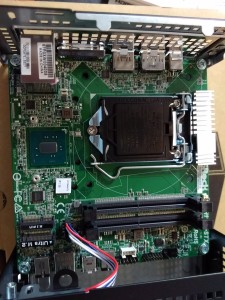 I have been building computers and electronics since I was a child. For Christmas I always wanted a chemistry set, biology set, 100-in-one electronics kit, etc. I learned to solder at an early age. I built a Heathkit shortwave radio for my dad for Christmas one year. More recently I have built 7 segment clocks, played with Raspberry pie, Arduino, and other electronic kits. I have also built most of the computers I have ever owned. My professional training is in Electrical, Electronic engineering, I think you get the idea.

Anyway, this will be one of several posts I hope to write documenting the building of my newest computer. I watch YouTube videos all the time about computers and electronics and it was one about the new ASRock DeskMini 110 mini-stx form factor 5×5 case with motherboard and external power supply that made me scratch my old itch. I loved the fact that it was so much smaller than the mid tower I build 5 years ago which I just recycled at Best Buy. It supports Intel i3, i5, and i7 65 watt CPU’s and uses SO-DIMM DDR4 memory. It has a lot of other nice features but instead of listing them all here you can check it out yourself here.

As it is a bare bones case I had to purchase the CPU, RAM, storage, and an operating system. I ordered the CPU, storage, and RAM from Amazon. The DeskMini 110 I ordered from Newegg. I found a way to purchase a legit OEM license for Windows 10 Home edition for only $27. I have already downloaded a bootable Windows 10 image which along with the license key will allow me to install an OS on my new build at a very reasonable price. Listed below are the specifics of the parts I bought. They should all be delivered by tomorrow or the day after. I can’t wait to get to building it. Wish me luck and I will be documenting the process here in another post.

In my last post I made the comment that I hoped my appetite for new “geek” toys was sated. It appears that was not the case. For some time now, I have been contemplating getting a HTPC (Home Theater PC). I wanted something that would hook directly to my HDTV system via cable. This would allow me to surf the web on my HDTV as well as provide flawless playback of high definition content.

I was contemplating getting a low-profile system from either Zotac orAcer. Both were very small and would fit nicely on the console with my HDTV setup. Using the included infrared or bluetooth keyboard I would be able to add significant capability over my existing Roku and LG Blu-Ray disc player.

Right now I am using two programs to add Internet content for streaming to my HDTV. The first program is called Tversity.  Tversity allows me to stream content that I subscribe to, including Youtube video, as well as content on my local network. With the included decoding capability, I am able to stream most file types without a problem. Overall, Tversity is a very good program.

The second program I am using is called Miro. Miro allows me to subscribe to a myriad of programming which is downloaded to my local network and then streamed via Tversity to my HDTV. It works similarly to iTunes.

There are also two media center programs which I am using to add even more capability to my network. These are XBMC and Media Portal. Both of these programs provide an interface similar to Windows Media Center. They allow me to view my photos, videos, and music in an integrated fashion. Both also include add-ins that add the capability to include weather, RSS, and other content. The problem with both of these programs is that the interface is not viewable on my HDTV.

The solution to the problem with XBMC and Media Portal is to install the software on an HTPC which would be connected directly to my HDTV. Thus my interest in the Zotac and Acer HTPC’s. The only problems with that is the dedicated nature of a HPTC. I thought a better solution would be a new laptop.

I had a Dell Mini 9 netbook which I use extensively in addition to my Dell Dimension desktop computer. The Dell Mini 9 ran Ubuntu 10.10 and I loved it. I said loved because I sold it recently. The reason I sold it was to help pay for my new ASUS Eee PC 1215B-PU17-BK 12.1-Inch Netbook (Black) which is on its way from Amazon.

With the ASUS notebook, I will be able to use XBMC, Media Portal, and Windows Media Center with the laptop connected directly to my HDTV via the HDMI port. The ASUS has enough horsepower to play 1080p content without stuttering or buffering. I am going to also add a bluetooth keyboard so I can control the laptop from my couch. When I am not using the notebook as a media center I can simply disconnect the HDMI cable and use it as a laptop.

I hope this will be a perfect solution. I will report back on it once I have received my laptop and had a chance to try everything out. Any comments  you may have about what you are using for a HTPC system are very welcome. That is all. Peace.

The night before last I installed a much newer version of the software I use for my online photo album. I have been using Gallery 1.5.x and I upraded to Gallery 2.2.2. Instead of actually upgrading my old installation, I installed the newer version by itself. This required that I create a new MySQL database on my ISP’s server. I have done this before so it was no problem. The new photo album software worked great, everything is cool. Not !! The next morning I discovered that my WordPress software as well as my MovableType software both could not connect to their databases. So I initiated a support ticket online with my ISP to see if they could fix the problem. I will leave out the details but the next day, after many more emails and two online chat sessions with customer support, my applications were still not working.

Exasperated, I called their 800 support number and talked to a real person. My problem was fixed within hours. It seems that if I use the same username for all my MySQL databases, they all need to have the same password. What happened was that when I installed the new MySQL database I used a different password than I had used for the other two databases. The new password was automatically replicated to the two existing databases, causing the applications to not be able to connect any longer as their config files had the old passwords in them. I should have know better because I received an error message when creating the new database about using the same username. If I had used a different username there would have never been a problem. I guess the older I get the dumber I get.

But I have to hand it to the guys at Bluedomino who finally fixed the problem. They were very gracious and refrained from calling me a dumb user. My hat’s off to the customer support staff at Bluedomino for putting up with this old dummy.

Well, I have Mambo and MovableType both working OK now on my Bluedomino site. I am currently installing DotNetNuke on my Siteground ASP.net site. I must be crazy to have two ISP’s but that is the only way I can run .Net applications and learn ASP.net.

Well, I just installed a CMS program called Mambo. It is written in PHP and uses MySQL for the backend. Once I learn how to use it I will develop my homepage for the site using it. I will then link all my existing content to it. This site is going to look professional if it is the last thing I do.

My next task will be to add a photo plug-in. I want to be able to add photos to my blog entries. I am also learning about Microsoft SharePoint Portal and ASP.net for my new job with the Army at TRADOC.