No, I am not the President of the United States. Nevertheless I feel compelled to present my own State of the Union, as I have never been accused of being introverted. The government has its take on the state of our country while the citizens of this great nation have their own. Seldom are the two in agreement on anything. The government seems to see things through rose colored glasses, which is what frequently happens when you are basically critiquing yourself. The citizens however, are critiquing those whom they voted as representatives for their interests. Things tend to be seen much more clearly from the perspective of the citizen as the state of the union is in reality about the state of us, the citizens.

Let me start with the 500 pound gorilla in the house, the economy. The President will present all sorts of statistics that demonstrate how well the economy is doing under his wonderful leadership. Has there ever been a President who painted himself as anything other than a genius when it comes to the economy? I am not an economist, I can’t easily counter with facts the claims made about the economy when statistics, presented as facts, are as tenuous as the wind. But I do know what I see, hear, and experience. What I see is 11 stores shuttered in the local mall I shop at. I see other upscale stores replaced with moon golf and Red Dragon martial arts venues. What I hear is the lady who rents from a friend of mine being unable to find steady work as a painter and having to move because she cannot pay the rent. What I experience is the young lady who is my Bible study class telling me she is desperate to find a job, any job, and yet is unable to do so. What I experience is the unbelievable cost to feed a family, pay the utilities, and pay my taxes. These events tell me that the economy is not in the state that the President says it is in, statistics be damned.

As bad as the economy may be, the moral state of our union is much more troubling. The rancor, divisiveness, intolerance, and apathy that is the hallmark of society today is far removed from what it was when I was a child. You can see this in the elections that are currently taking place across our country. Again, while politics has never been played out in a completely civil manner, the degree to which civility in politics has taken a nosedive is stunning. This decline in civility can be seen in every other aspect of our society. Racial tensions have never been higher, even with a black President. Religious intolerance, where religious protection laws are portrayed as anti-LGBT and businesses are being destroyed simply because the owners were exercising their religious beliefs, is rampant. LGBT rights are not greater than religious rights, both need to be respected.

Our national security is threatened at a level unseen since WWII. A weak, naive foreign policy, based on misguided beliefs and ideas, has emboldened our enemies while at the same time left our allies isolated, ignored, and betrayed. Our president just finished visits to Cuba and Argentina, neither of which has ever been an ally of ours, while completely ignoring the only democracy and ally we have in the Middle East, Israel. China is building artificial islands in the South China Sea and militarizing them, while Russia has committed aggressions against South Georgia, Ukraine, and the Crimea. We have unlocked billions in frozen assets to Iran, the worlds largest sponsor of state terrorism, while at the same time doing little to deter them from obtaining nuclear weapons. Iran still threatens us and has even taken our sailors prisoner, continuing to mock us at every turn. North Korea daily threatens us with nuclear annihilation while our response is to weaken our military capabilities to almost historic lows.

Suffice it to say that I and the President do not see eye to eye on the state of the union. I know that there are many, many more citizens of this great country that feel as I do. Unfortunately I do not have much optimism that things will change for the better any time soon. Actually, I am as pessimistic about the future of our country as I have ever been in my life. The Democrats offer us Hillary or Bernie. Hillary was a disaster as Secretary of State and her reckless disregard for law, procedure, and national security in the establishing of a private email server should have every voter cringing at the thought of her becoming president. Bernie is a Socialist who is anathema to everything our Founding Fathers stood for and promoted. His grandiose plans of free everything will cripple the already overburdened taxpayer with more taxes. It will also generate an even bigger government than the already far over-sized one we have currently. The Republicans are as big a disaster as the Democrats, almost. The only reason Donald Trump is doing as well as he is with voters is due to the great level of anger and frustration that the voters feel by their betrayal by establishment politicians. He would be a disaster as a president, on a scale with either Hillary or Bernie. Ted Cruz, being a Constitutional Conservative, closely reflects my political view. But I fear even he would be just more of the same. The two parties have merged into one party, where there is no middle, only the extremes on either side.

The damage done to our country may be irreversible. This great experiment of a Republic that the Founding Fathers made for us may have run its course. And as history has shown, the downfall of most nations comes from within. The only solace I take is my faith in God. He is in control and his Will will be done. That is sufficient for me. I just wish it hadn’t happened in my lifetime. 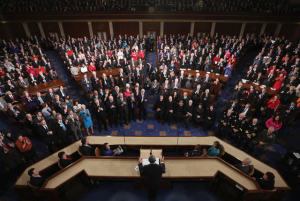